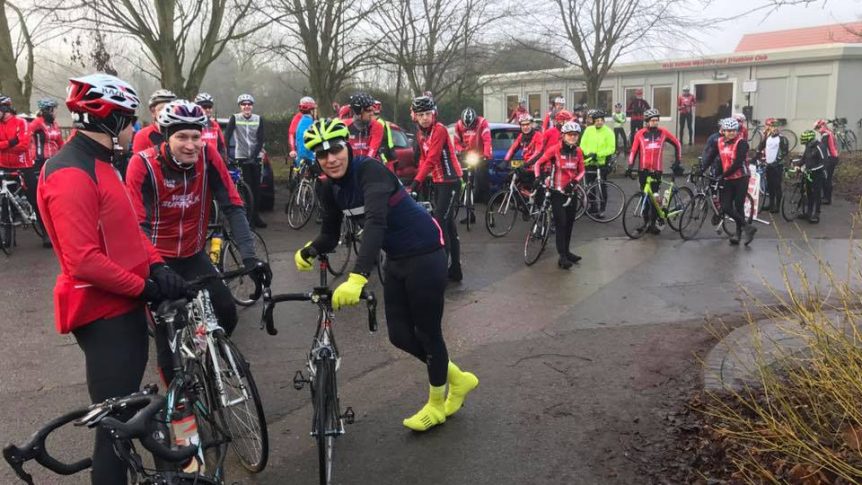 A foggy start soon gave way to sunshine and probably the best riding conditions seen for a few years. Although the wet roads and submerged potholes meant riders couldn’t spend long taking in the views of the West Suffolk countryside.

124 riders signed up for the three distances. Second only to last year’s record number.

In a complete turnaround from previous years, the lion’s share of the entries were for the 75 mile route. 53 set off for what is always considered to be a major test of riders’ current condition. And as the 45 finishers arrived back in varying stages of fatigue, it was obvious who had spent time sitting on wheels and who had been on the front. The facial mud-packs resembled a scene from a Flanders’ spring classic.

Another surprise was the number of finishers in the 18mph average speed category. 28 in total. Finishing well up in the group was West Suffolk Wheeler Zoila Fernandez, the only woman among the 53 riders tackling the 75 miles. No mean feat, particularly as she has been recovering from a broken arm. Another rider also recovering from an injury was Dale Sturman. A broken leg scuppered his 2016 season, but judging by his ride he will soon be back up to speed. Young Sam Asker was another rider worthy of note; hanging in with the fast bunch of leading riders.

17 finished the 15mph average category with a young Harry Shingleton showing signs of following in his father’s footsteps, tyre tracks and waves.

Four women completed the route: Jan Murton, Annie Drugan, Laura Brown and Liz O’Riordan. A good ride from Liz after her inspiring fight back from cancer. Aided on the ride by her husband Dermot, piloting their tandem.

A good turnout of 44 starting the 36 mile route. And good to see 10 women coming in among the 42 finishers. Four finishers at 18mph average, 23 at 15mph, 10 at 13mph and five at 11mph. Young Harley Gregory did well to pace his grandad, Barry Denny, to a 15mph average. A good to see Tony Panting nailing an 11mph average, digging deep for this one due to a long series of chest infections; you’ve got to admire his tenacity.

I know this piece is peppered with illness and injury, but there is one more rider who deserves a special mention. After a traumatic arm and shoulder injury whilst descending a Scottish mountain, and undergoing a long period of recovery, Sue Dunne was back riding the Punch again, and averaging 11mph for the 36 mile route. A courageous ride by Sue.

And finally it’s a matter of thanking Neville (soon to be a BEM. British Empire Medal, or perhaps, Best Ever Member?) for his invaluable work preparing the site, Maureen, Sue and Ann for signing on riders and feeding them afterwards, and to the bakers of the mouth-watering array of cakes – thank you Carol, Liz, Chris, Alan, Mark, Chris, Dee, Jan and Gill (if I missed any one, thank you too).

Sorry I can’t list the finishing order. Not allowed I’m afraid. It’s not a race you know.

See you next year.