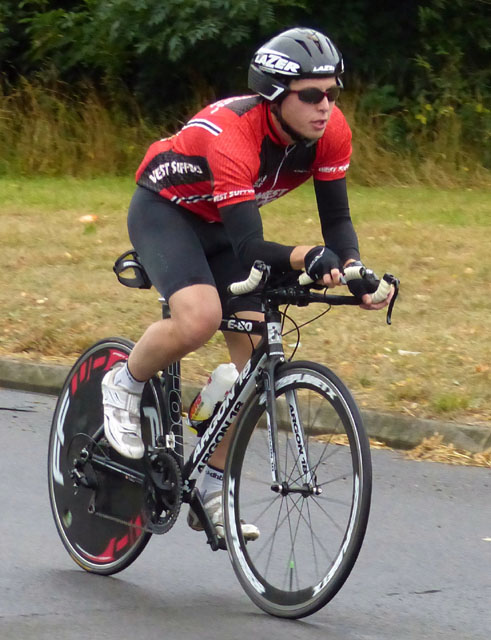 Jake Towler and Malcolm Borg took on not just the 50 other male competitors but also the tough westerly wind at Cycle Club Sudbury’s 50 mile road race on Sunday 21st Aug. Held over 4 undulating and hilly laps of the Bulmer course, the 3rd and 4th category race provided a stiff exam for both Wheelers but 18 year old Jake Towler yet again stepped up to the plate and, drilling around the course, he maintained a fast pace with the lead group throughout to finish a very impressive 7th. Malcolm Borg raced well and finished high up in the 3rd finishing group.

Across the county, Scott Williams and Angela Joiner Handy also found the windy Waveney Valley a “trial” in the VC Baracchi open 50 mile time trial. Held over the B50/17 Wortwell Course, Scott will take his time of 2:14:51 confidently into the forthcoming cyclo cross season. Angela Joiner Handy, a very experienced 10,000m metre track runner who has competed on the international and Commonwealth stages, took the conditions and distance in her stride with an accomplished 2:29:02.

Mud Sweat and Gears – Round 6

Off road racing courtesy of round 6 of the Mud Sweat & Gears series, took place at the Radical Bikes’ venue near Chelmsford, also on Sunday.

The course itself provided plenty for racers to contemplate, with a good mixture of woodland single track, flowing sections and bomb holes a plenty to test racers’ technical and bike handling skills.

Triathlete Matt Shingleton took on the aptly named Monster Middle Distance Triathlon on Sunday. With a race HQ at Ely, the 1.9km open river swim, 98.2km bike section and 21km run provided plenty of challenges and saw Matt tap into the grit and determination shown by the Brownlee Brothers in Rio on Saturday to crown his own Olympic efforts with a superb 6th overall finish.