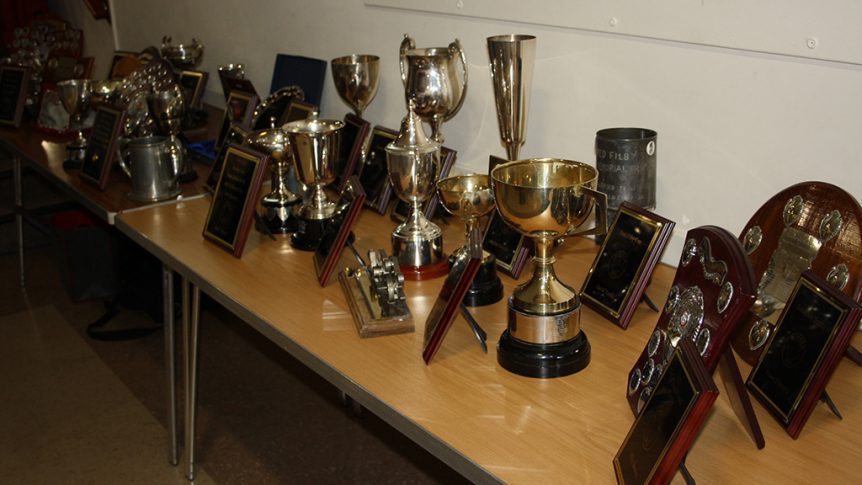 The Club’s Roller Racing championship provided added spice to this year’s Annual Prize Giving, with three exciting competitions over the evening. The racing complemented an evening that celebrated the club’s champions across the wide range of competitions in the club over the 2016 season.

A full list of all the winners is below, but notable winners include Paul Vickers with a haul of 5 trophies from a great season of TT racing. Zoila Gilham-Fernandez came away with literally armfuls of trophies in a very fruitful season. As well as her TT racing, Zoila’s 2016 included an attempt at the Race across America, which no doubt contributed to the well deserved award of the 60th Anniversary Tankard for Endeavour. 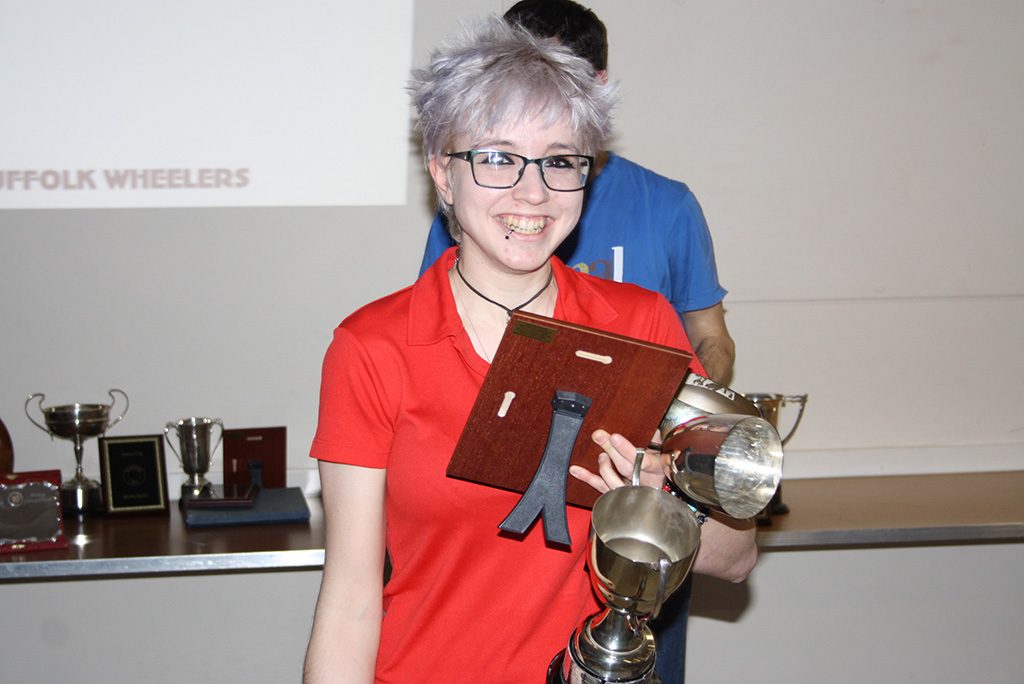 Zoila Gilham-Fernandez staggers away with her trophy haul

The Club’s Triathletes were well represented during the evening after what has been a great season of competition. Winners of the Club Triathlon Championships at Fritton Lake in July meant a raft of new prizes to be awarded across multiple distances and age groups. Winner of the Hoxley Cup, voted by all members, was Helen Samuel after her performance in the Lisbon ETU Triathlon European Sprint Championships. 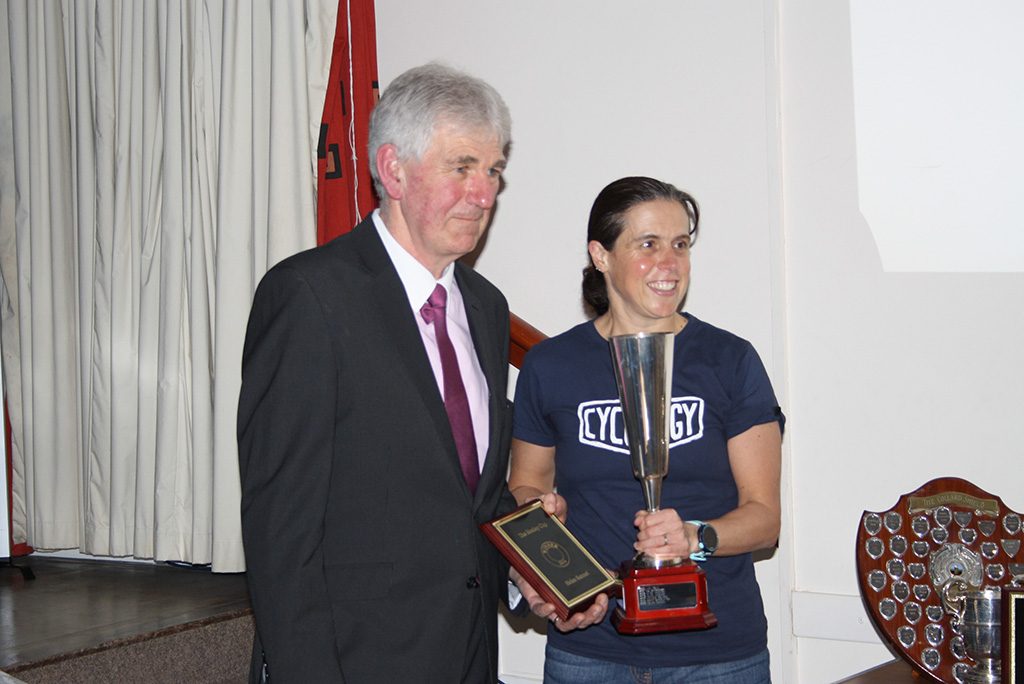 Helen picks up the Hoxley Cup

Triathletes were also very evident in the night’s roller racing with representation in all three finals. After individual 500m time trials to determine seeding, the night got noisier as the knockout rounds began. The first men’s knockout round went to form, the only surprise being a disqualification for Boyd Nicholas for a false start. The Youth semi-finals were hard fought; Megan Free won a tight race with Harley Gregory and Oscar Woodward saw off a strong challenge from Charlie Knowler to set up an enticing final. 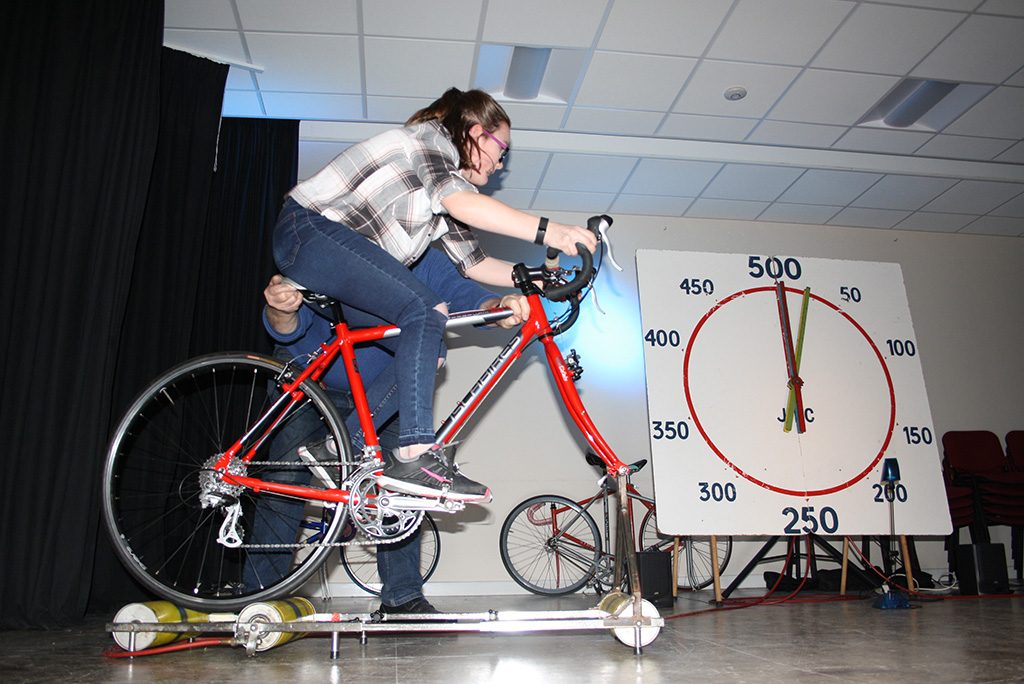 The club’s young riders were recognised in the prize giving, with Kirsten O’Brien and Fraser Elsworth receiving the Schoolgirl and Schoolboy championships. Miles Taylor won the Junior cup and Megan the Silver Spoon Trophy. Despite their exit from the Roller Racing, Harley and Charlie had a good evening, with Harley picking up the Richard Pike Cup for his championship in the 2015/16 cyclo-cross season and Charlie winning the Novices Cup for his superb National Hill Climb Championship. 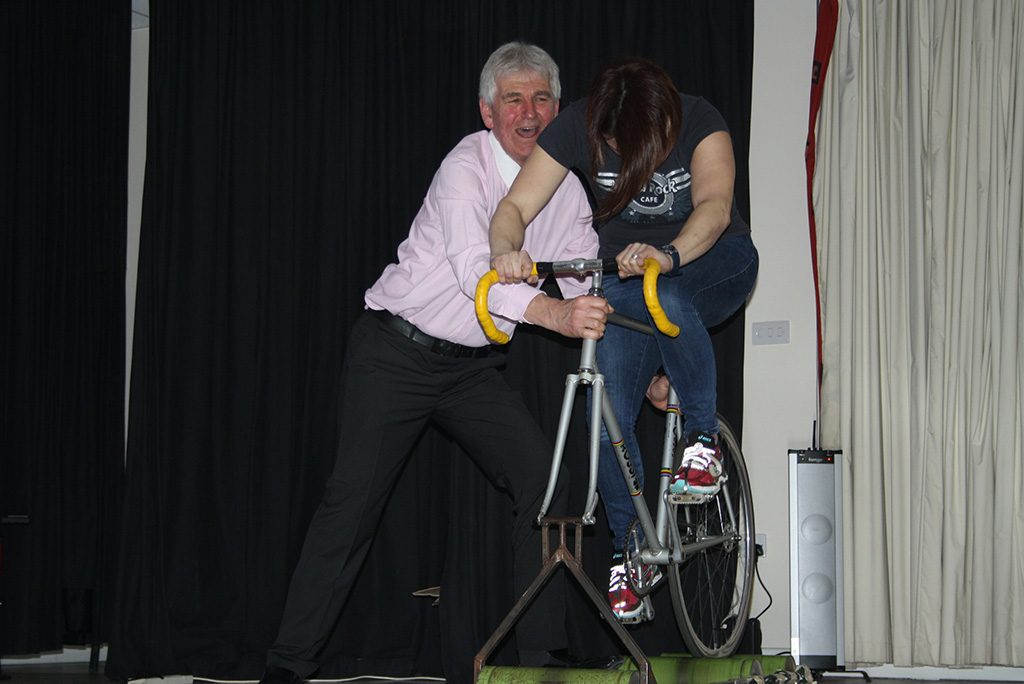 Neville struggles to hold on as Nicole powers to the win

The first roller racing final of the evening was the Ladies final, pitting Hannah Mclnroy Naylor against Nicole Gregory. They were neck-a-neck until the final 150m when Nicole edged ahead to take the win.

The Youth final was another hard fought affair, with an all-out effort required from Oscar to edge out a determined Megan. 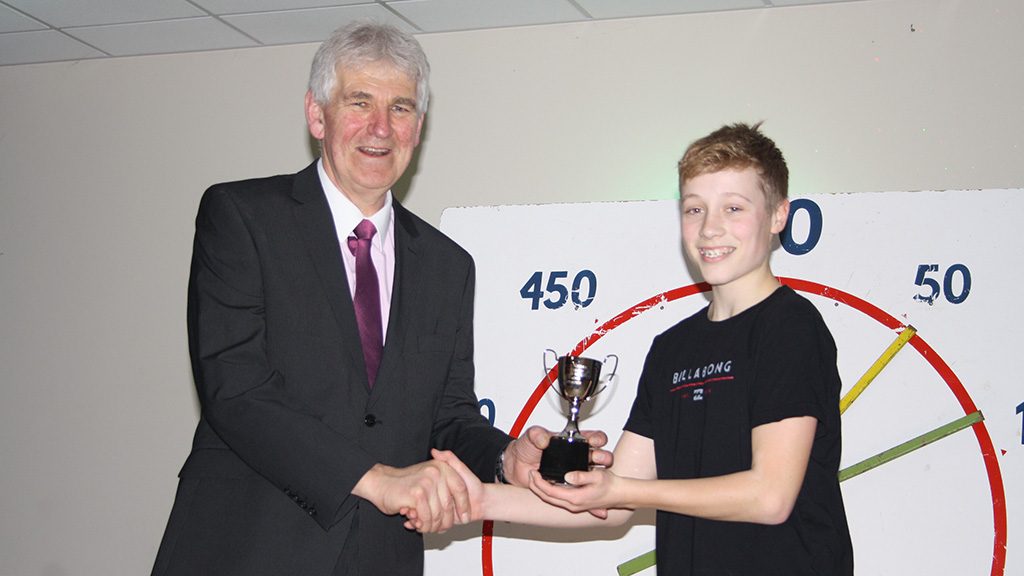 The men’s final was a comprehensive victory for former champion Chris Hinnett, shaking off a day on duty at Portman Road while opponent Phil Clark was unable to recover from a hard fought semi-final run off. 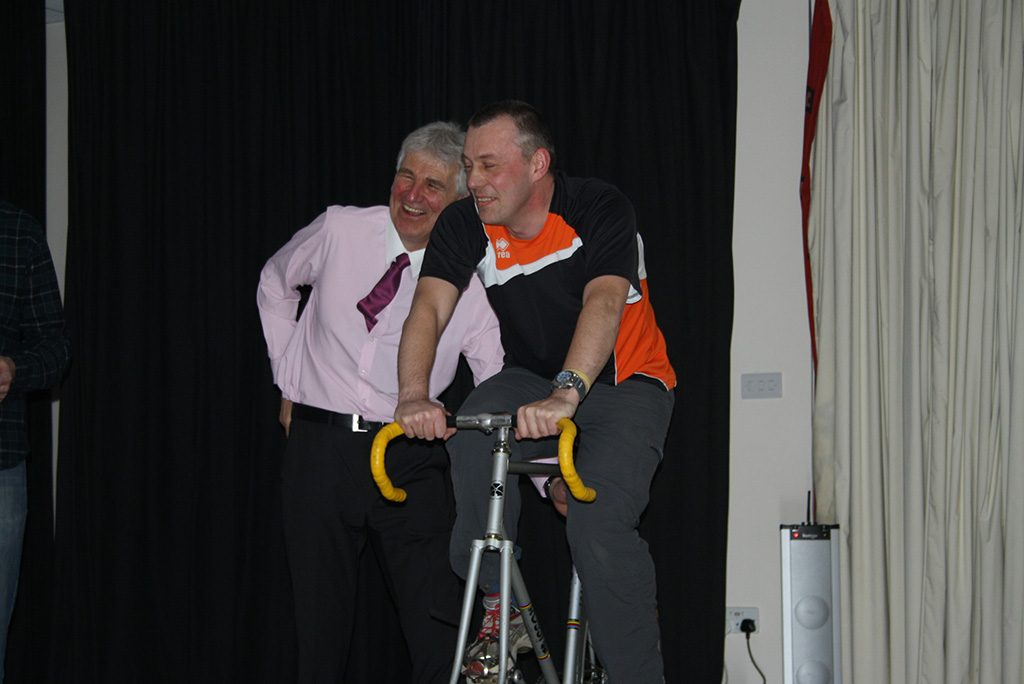 A relaxed Chris Hinnett in the calm before the storm

The final Prize presentation of the evening was an emotional Lifetime Achievement award for Chairman Neville Pettitt, presented by President Don Picking to a standing ovation from those present. Neville thanked all club members for their support and encouraged them to continue organising events so that he can continue to help out! 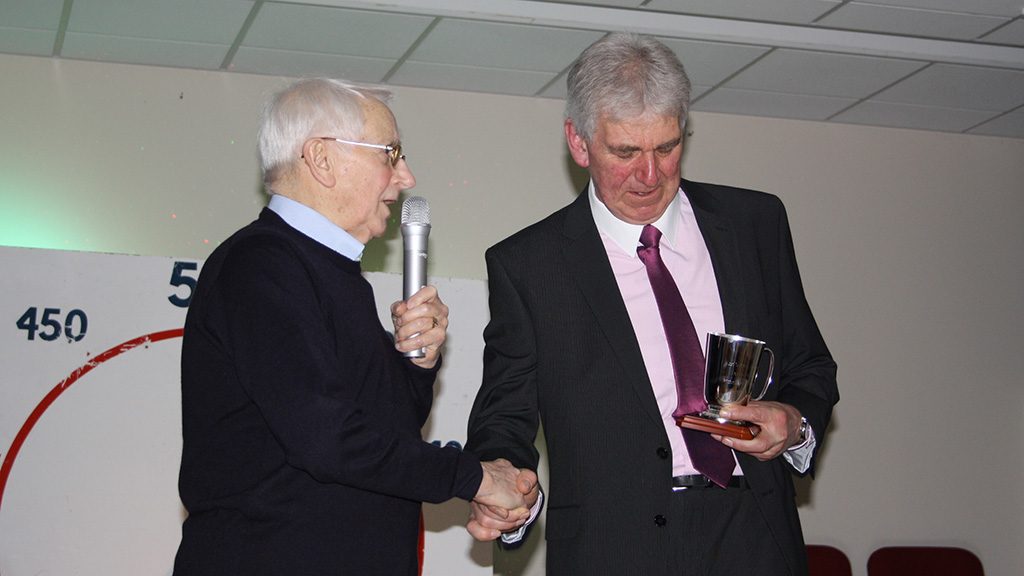 Special thanks must go to timekeepers Don Picking and Geoff Byne, bike wranglers Neville and David Ballam, buffet prepared and served by Helen Ballam supported by Brenda Picking, photography Malcolm Macfarlane (more photos available – click here), trophy management (and polishing!) by Richard Farrow and an excellent prize compere in Mr Paul Callow. Final thanks and congratulations must go to all the trophy winners and roller racers for making the event a great night.