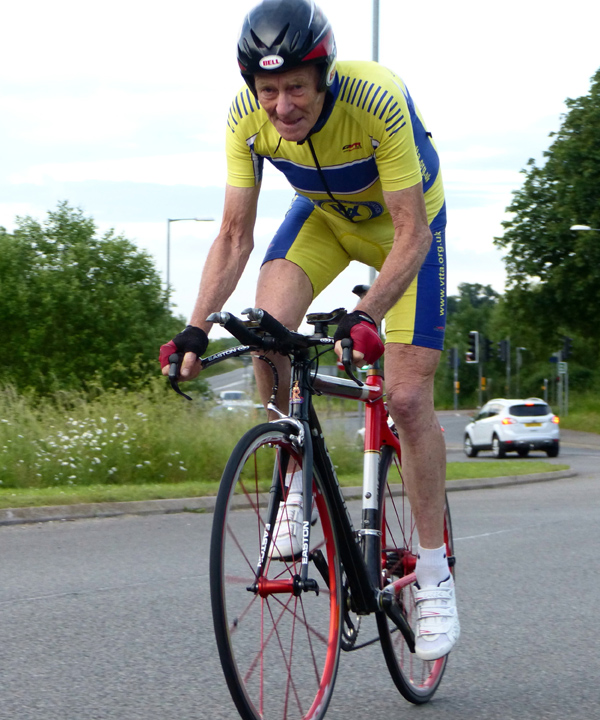 West Suffolk Wheelers & Triathlon Club rider Ron Back returned to his time trialling best, storming to a new national age category record at the recent CC Breckland Open 15 mile time trial on the B15/1 course between Attleborough and Browick on 6th July. Ron’s time of 37:45 belied his 77 years and showed he can still hold his own over the distance. Club mates Paul Vickers (31:10) and Alan Hale (36:22) also put in the effort.

Ron was back in the mix at the Team Cambridge 10 mile open time trial on Saturday 16th July. This time held on the F2/10 course on the A428 between Cambourne and Madingly, the outleg was very much wind assisted which meant hard work back into the head wind on the return leg. Ron posted a well earned 26:01, with top Wheeler  finish going to Richard Carrington who stopped the clock in 21:47. He was closely followed by Paul Rooke (22:18) with the trio of David Howes (25:33), Mark Eastwood (25:46) and John Steed (26:39) riding well. A disappointed Jim Greenwood (27:05) and John Coles (27:11) rounded off the day’s riding.

Richard Farrow meanwhile rolled out the miles at Sunday’s Eastern District Cycling Association’s 100 mile time trial on the B100/4 course on the A11 between Wymondham and Snetterton. A warm if breezy day did not distract Richard, who posted a commendable 4:14:03.