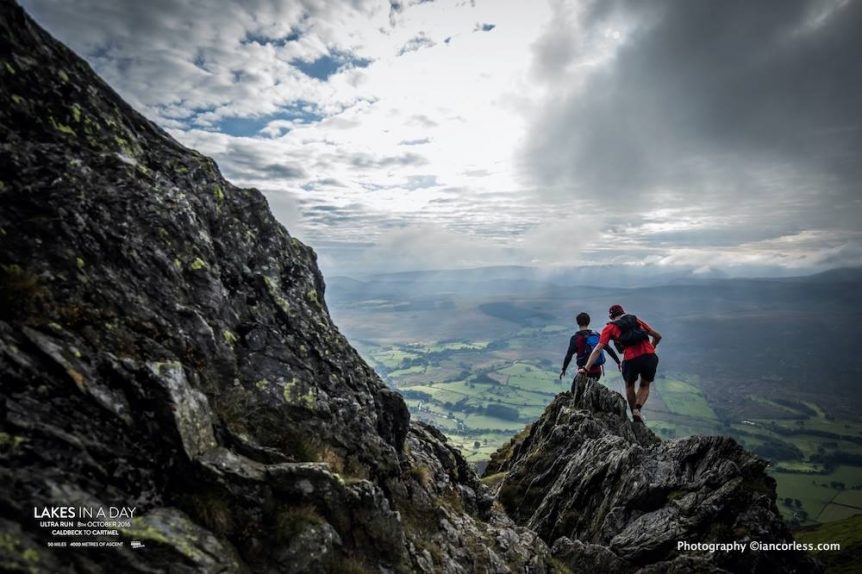 Three Wheelers were in action at the Lakes in a Day ultra run on Saturday 8th October. 50 miles, 4000m of ascent, the route ran from Caldbeck in the north to Cartmel in the south. Matt Shingleton, Sarah Wells and Hayley Brewis took part with Matt finishing 24th overall from 400 participants in a time of 12hr 42 mins. Sarah and Hayley showed incredible grit to finish the course in 22 hrs, with a large part of their race completed in the dark.

Here’s Matt’s report on the day:

“Race report from Lakes in a Day. A long post, but it was an epic day!!!

05:45 on the bus at Cartmel for hour and a bit ride to the race start at Caldbeck. My first Ultra run and first real fell run, at this point I had no idea what to expect.

08:00 off we go along a minor road, then soon off onto a track which started ascending High Pike (658m).  A couple ups and downs before a long descent across burnt heather, trying to keep the ankles from turning over, to drop down to a cold stream crossing before a monster 500m ascent up to Blencathra.
A lovely clear day, views were great and feeling just fine. Cloud was 50ft below the peak of Blencathra (868m, and 1hr56), where I opted to take the pansy route down via Blease Fell instead of Halls Fell ridge (which looked a bit scary to me). The only course deviation allowed. I added a couple extra kilometres this way but it was all runnable, and the guys I were with on Blencathra had only got to our first feed station at Threlkeld two or three minutes before me so I was pleased with my more caution route decision.

2hr28 at feed station 1, 19km so far, not really sure what to eat. But a cup of tea and a cheese sandwich seemed to be good. I have never done a sport before that involves a cuppa mid event. Camelback bladder re-filled and off I go for a few kilometres along a disused railway line before the long, long ascent to Clough Head (726m). The route didn’t follow any defined footpath, so was a tough grassy slog, but once there the views along the long ridge all the way to Helvellyn were awesome. It stays up on a high ridge for a long time, up and down a few hundred meters along the Dodds, views to the west to Thirlmere and Ulswater to the East. My favourite part of the Lakes, Glenridding, Red Tarn, Grisedale. All the ascents walked, the speed benefit of running doesn’t work out to be too efficient. But the surface was all good for running when not going up. There were a few mountain bikers flying down the hills at some amazing speed. Loony I thought, but they would probably think the same of us too. Loving this run so far.

Topped Helvellyn (950m) at 5hr5, 34km. The route then followed some uncomfortable stony paths to Dollywagon Pike, then the seemingly endless, quad burning descent down the big rocky steps to Grisedale Tarn. A few hundred meters vertically, really hard work. No time to enjoy the views or cool my feet in the tarn, so round the corner and almost straight away up a nasty, loose and gravelly ascent zig-zagging up to Fairfield. Once up on that ridge the views were fabulous again, can see all the way to the sea and where we were heading towards, to Windermere. The path up there was so stony, really uncomfortable at times. Glad it was dry though – it would have been pretty difficult with wet, slippery stones everywhere.

Eventually we could see our next stop at Ambleside, the church spire showing our way. As I approached I was noticing that we were still quite high, well over 600m and Ambleside was not far away horizontally, but big vertical drop. A steep descent to come along. More quad burning downhills until we joined a track and then a small road to take us into Ambleside for our second food station.

7hr22 so far, 50km, so 30 odd km to go, but no more fells, mostly tracks and paths. My aim to get as much complete before it gets dark as I had been told that the woods are really difficult to run through with roots and stones trying to trip you up. Nice bit of pasta and another brew, camelback refilled and off I go. We were allowed to swap shoes and it was fantastic having clean, dry socks and road trainers instead of fell shoes. So much more squishy and comfortable and wouldn’t need the knobblies any longer today. Then I found my camelback bladder was leaking and dripping down my back, soaking my backside and tights with sticky energy drink. Oh well.

My company I had from Ambleside couldn’t keep up, so I had to leave her and had a really nice run, trying to keep my kilometer splits at about 7 minutes. Mostly done, except for the couple hills, an unpleasant hill to High Dam getting in the way. I knew at this pace I’d still finish in the dark, but keep the last feed station short to maximise my time in the daylight.

10hr36, 72km so far and 12km left to go. Another cup of tea and a sandwich and when I left the building it was dark and a few hundred meters from there was into woodland, more roots, rocks, logs and other trippy up things means torch on. I caught up with an old guy who knew the area, so I kept with him. 12km, not far, can’t take long…. Well, it took just over 2 hours. Running at night is not very easy, even with the frequent reflective arrows pointing the way. The last 4km along a road to drop down to Cartmel, kicking along at a nice pace of 5mins per km felt great. My legs screaming at me, but they can rest another day.

Into Cartmel town to cross the line at 12:45. What a great day. We were really blessed with amazing weather, the route was awesome and I was pleased to find I was 24th overall out of nearly 400 runners. Feeling dehydrated and sick, back to my hotel for a shower before getting back to the finish point to eat, drink and wait for a few others to come home. Painful massage probably helped, but I’m still hobbling around less mobile than the average octogenarian.
The event was run so well, helpers at the feed stations great, signage where needed all there and so nice doing an event where you are going at a pace where you can have a natter with your fellow runners. And everyone was so nice and chatty during and after the race. Would strongly recommend this event.

Sarah Wells and Hayley Brewis were along there too and I think enjoyed this. I’ll let them say. Just over 22 hours, so a long day. Much respect to them both showing such determination, most folk just can’t keep going for that long.”

Matt was running in support of Liz Sheppard, raising funds to enable nanoknife & immunotherapy treatment in Germany for her rare small cell cancer. Go to the justgiving site and please be generous. https://www.justgiving.com/crowdfunding/liz-sheppard-Hardy