Having just landed the day after Lesley and Steven Linden’s races, we were keen to drop our bags and not miss the start of the Standard Distance Duathlon to cheer on both Scott Williams and Steve Rue.

The music was blasting and crowd buzzing prior to the mass start for each wave. Then both the music and crowd fell silent before the heart pounding ‘on your marks’ and quick blast of the hooter sent the athletes off on the first run of 10k. 4 laps of the 2.5km course made it really good for spectators and we were able to see both Scott and Steve looking really strong on the initial leg. 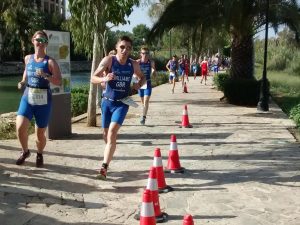 All was going well for both athletes when disaster struck for Scott – puncture! Unable to continue despite his best efforts with the sealant, we really felt for him. However, puncturing at 33mph, at least he was able to keep it upright and stay in one piece.

Still out on the course and flying the Wheelers’ and GB flag, Steve Rue was making good progress and was in touching distance of his age group leader at each stage, eventually claiming a fantastic silver medal in a time of 2:14:03 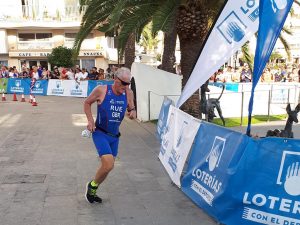 4 down, 3 to go. Helen and I were next in the Aquathlon. Yet again, we were both in the largest age group sizes with several ex-elite athletes in there for good measure. This was a long day as the organisers had timed the event to finish at sunset near the iconic Ibiza setting of Cafe del Mar. We were ferried out in our mass waves to some strange tunes of ‘the love boat’ and ‘Sponge Bob Square Pants.’ This did little for the nerves but lightened the mood a touch.

With a water temperature of 23 degrees, this was a non-wetsuit swim. 1km off shore, we had to literally each walk the plank and gather near the starting buoys to await the starters orders. Again, the blasting music fell silent and we were off. The straight forward left turn, right turn 1km course was challenging due to the mass start and big swell. Sighting the red buoys was not easy and even more difficult for Helen due to her wave also having red swim caps. Swim over and it was on to the run. This was 2 laps of an out and back 2.5km with a cheeky, twisty climb in the middle.

Both of us were relatively pleased with how we finished in our age groups and not too broken. Helen was 21st and I was 11th. My overall time means I qualify for both next years’ European Championships in Romania and the Worlds’ in Spain. 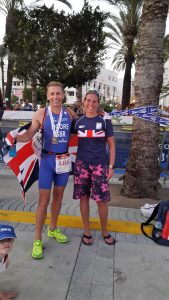 Laura Brown was the last Wheeler off in Aqua-Bike. Unfortunately, our flight was the morning of Laura’s race. However, the horrendous thunder and lighting storm meant that we were delayed for 5 hours and the race had to be shortened to 1 lap of on the bike.  This is Laura’s own account of her fantastic result.

“With thunder and lightning forecast for race day, and a storm directly overhead during the morning, the race officials made the decision to delay the start of the race until mid afternoon and shorten the bike leg from 90km to 46km. The swim remained at 1,900m.

My swim started brilliantly and I was with the lead group for the first few hundred metres however as the swim progressed I fell further and further behind the leaders. After a jellyfish sting to the face and forearm and feeling nauseous throughout the swim, I eventually finished the swim last in my age group and 48th overall.

Even though the bike leg of the race was halved we still rode 46km with 340metres elevation gained. The course was still very wet and the rain started again soon after I was out on the course. Conditions were quite dangerous and there were numerous crashes, however, with such a bad swim I had a lot of chasing to do. I finished the bike leg in 1hour 21 minutes, moving up 27 places to finish 21st overall and 3rd in my age group. This as the first ever aquabike European championships and my first ever podium in an international race.” 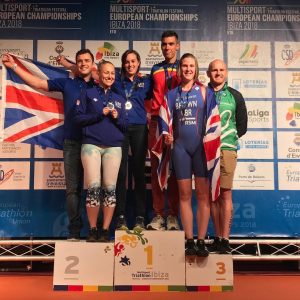