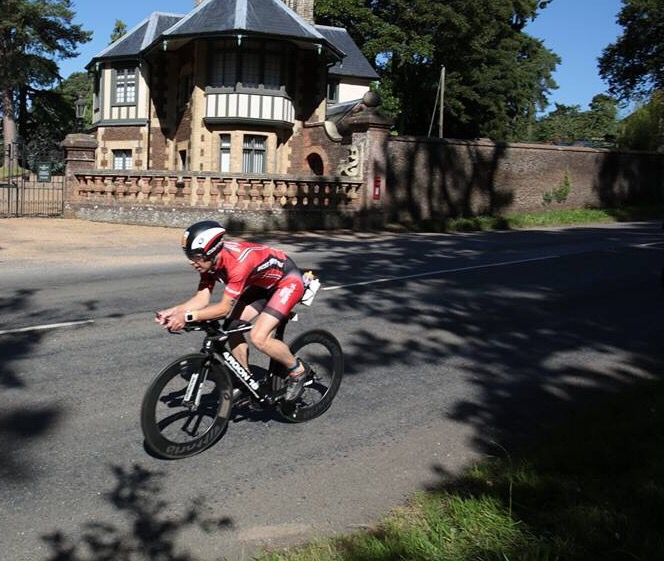 Seven Wheelers entered Sunday’s 70.3 Triathlon at Holkham Hall in Norfolk and as Ray Reeves reports, it was an enjoyable and well organised event:

“The race started early with Wheelers going off from 06.45 into the lake that was officially “nice”.

The 1900 meter swim route took us around two small islands and up an exit ramp into T1. Transition from the swim onto the bike went well, finding the bike amongst the nearly 1500 others first time. Transitions at the length of race are not quite so frantic as you might find on a sprint race, but still all Wheelers were out in around 2 mins, and out on the start of a 90k TT.

The bike course was tough with short sharp hills and long drags. These were made worse on the first part of the course with a gusty head wind. Once we were past the halfway point around the Sandringham area the wind was now starting to turn in our favour and the final 40k was with the benefit (mostly) of a tail wind. The final section of the bike found us turning back into the grounds at Holkham Hall, which although being an amazing place to ride in, was also up hill for the last 3 or 4k.

Transitioning into T2 for the run leg that would see us all running a half marathon went well (and yes there were socks ! ). The run started with a 1k incline that really tested any jelly legs that we may have had. After 2 laps of the 7k course the pain had set in and it was now a matter of digging in and not stopping. Finally the finish line came into sight and with a quick rush I past the line in 5hrs 43 minutes and 20 seconds . This was the first middle distance race I have done and was happy with the result.

If anyone is thinking of entering this race for next year I can highly recommend it. This was the most well run and organised race I have ever entered. All bases were covered from feed stations and toilets, to a great family atmosphere.”