As with every race the weather forecasts are closely watched for days before.  These went from good to getting much worse for race day.  However, as luck would have it, apart from wet roads the conditions were very good with mild temps and light winds. The water could have been warmer, but at 13c not freezing.
Starting the 1500mtr swim from a deep water start in a large field proved tricky to find a way through until just 200mtrs from home. Into T1 with no issues and out onto the 38km ride. Road conditions were good for a fast non drafting ride, up to the point that a stick managed to wedge itself between my back wheel and frame. This meant a stop of around 30 seconds to clear, which proved costly at the end of the day, costing me a position!
T2 came along quickly, and again with no dramas, saw me out on to the 10km run.  The run around Grafham water on any other day would have been scenic and enjoyable, but on race day is just a never ending run.  However, I ended with a time of 2:21:35. 12th in Cat.  Not as quick as I would have liked, but they never are; ask any triathlete.
Also racing were Malcolm Macfarlane 21st in Cat 2:28:54, Laura Brown 13th in Cat 2:27:04 and Winston Ewers 28th in Cat.2:26:46 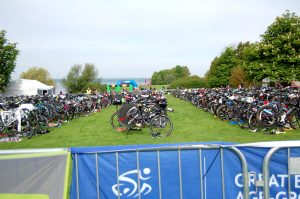 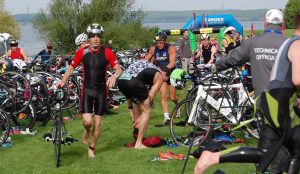 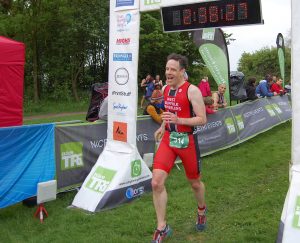 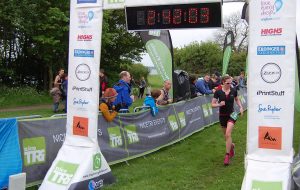