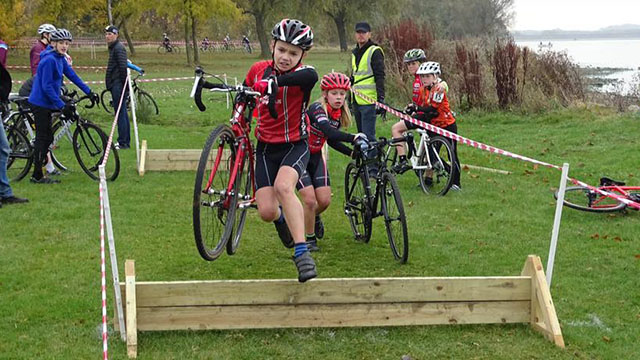 The Christmas break gives us a chance to review the excellent results West Suffolk members have been achieving in the Eastern Cross League. Thirteen of the sixteen rounds have now been held, with three to come in the New Year, with each rider’s best ten results counting to overall League placings. We have had no less than 23 members scoring points to date, and the club is in a creditable 5th position overall, out of 45 clubs having registered points.

Starting at the youngest end of the spectrum Caris Gregory is leading the Under 8s, and is placed 11th in the Under 10s, with Sam Brook always up with the leaders and in 5th overall. William Ireland has also had a couple of promising races.

With four outright wins in the Under 12s Harley Gregory sits in second overall in that age group, trying hard to close a six point gap to the current leader.

With four rides each Matt Waller and Charlie Knowler have been representing us well in the demanding Under 14/16 races, which use the full adult course, and our best Junior in the Open race, which also includes Seniors, has been the ever-improving Harry Shingleton, currently fourth, with Clement Wallace making progress with three promising rides in recent events. Laura Brown has been our only rider in the Women’s races, but has made a very promising start and will be one to watch next year.

Matt Denny has done every round so far and now regularly finishes in the top 20 in  the often full Vets 40+ races and is currently 10th in the league, with Matt Shingleton 42nd. Stu Grand and Stephen Brook have also contested this race on three occasions and are planning fuller seasons next year.

Our biggest contingent has regularly been in the Vets 50+ race, which is almost always over-subscribed. Paul Watson has recorded three top three results, which sees him third in the league, with Peter Golding 13th and second 60+, and Mike Bowen currently 30th, but from only six results to date. Barry Denny sits in 36th (4th 60+), with Dave Griggs 41st and several other riders having contested some rounds, including Ian Mortlock (6 events), Nick Rush (5), Paul Sawyer (4), Adrian Grimwood (2) and Dermot O’Riordan (2).

It has been a great season so far, with a good mixture of courses and always the same friendly atmosphere throughout the day, and encouragement across all the age group races. There are now three events to conclude this season so if you are interested in having a go next year, come along and watch and see what fun we have!