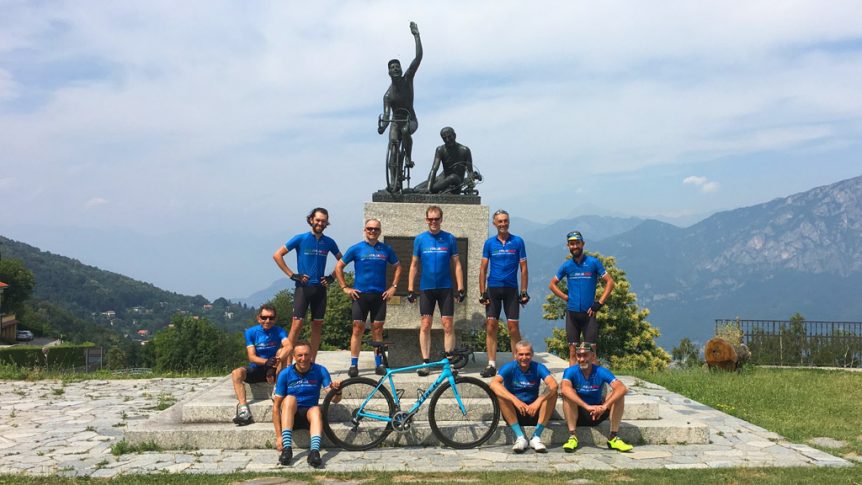 It is hard to argue against Italy being the spiritual home of cycling. While the English invented the modern bicycle and the French have Le Tour, no-one has a passion for cycling quite like the Italians. And no other Wheeler has a bigger passion for Italy and Italian cycling than Justin Wallace. To celebrate his 70th birthday Justin hatched a plan. He was to ride the length of Italy from toe to top and he needed a crack crew of Wheelers to ride with him. So it was, after a year of careful planning, that 12 (current and former) Wheelers assembled in the Palermo Marina ready to ride. 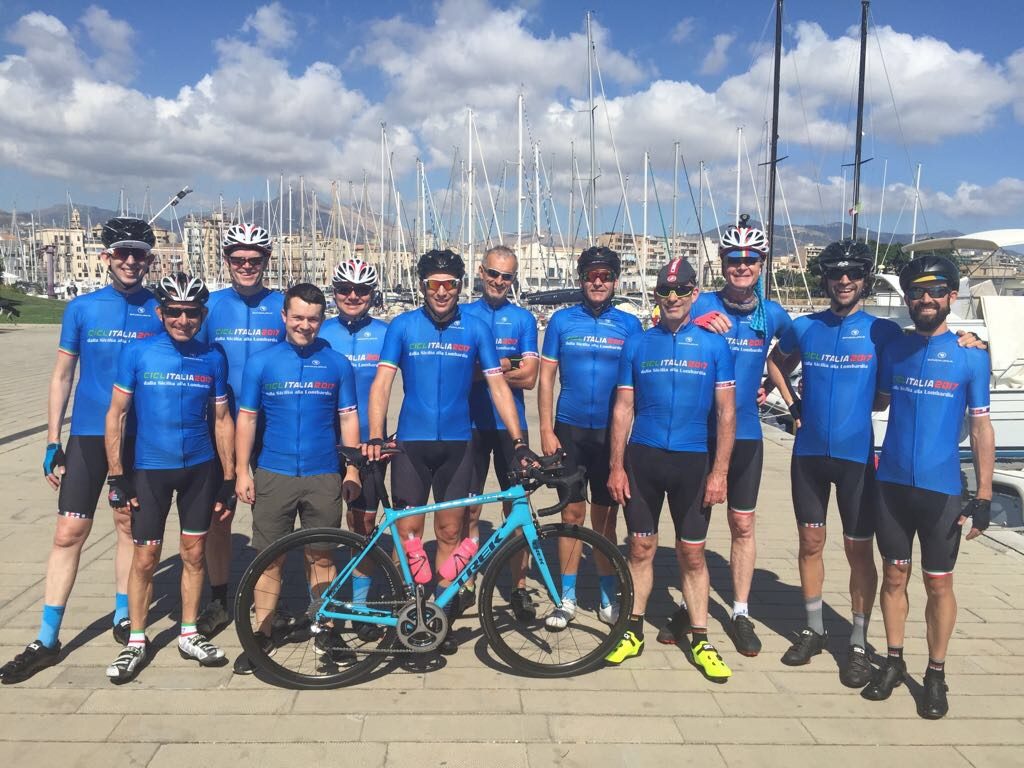 The Team
Justin had his two boys, Jack and Simon as first on his list. Like their Dad they’re talented, strong riders, skinny as whippets and when they’re not riding they’re re-fuelling. There were the two Dykes brothers, Neil and Mark. Most of you will know Mark; he was Mr Fixit on the trip, sorting out the logistics and as always, happy to help anyone. Some of you will know Neil; he drove everyone on, keeping things moving, whether that was to go round it, over it or straight through it. Julian Long and Darren Davies were the engine room of the group; powerful riders who’ll just keep pushing on all day long. Paul Callow not only sorted out the magnificent azzurri blue Ciclitalia kit, but along with the irrepressible Dr Guy Lesser kept a smile on our faces. Soren Sjolin added a bit of culture and individualism to our team, while I was there just to keep everyone on the right route. Last, but by no means least, we recruited the Wheelers very own Sam Jackson to drive the support van; ferrying our stuff to each night’s accommodation and grabbing whatever riding he could in between.

The Route
The route was to take two weeks and began with two days along the north coast of Sicily, followed by three days on the coast road of the mainland to Agropoli. Leaving the sea at Amalfi, we were to skirt Naples and into the hills east of Rome, before heading into Tuscany for more climbing. The last three days pushed over the Appennines and through the Po valley to a grand finale around Lake Como. 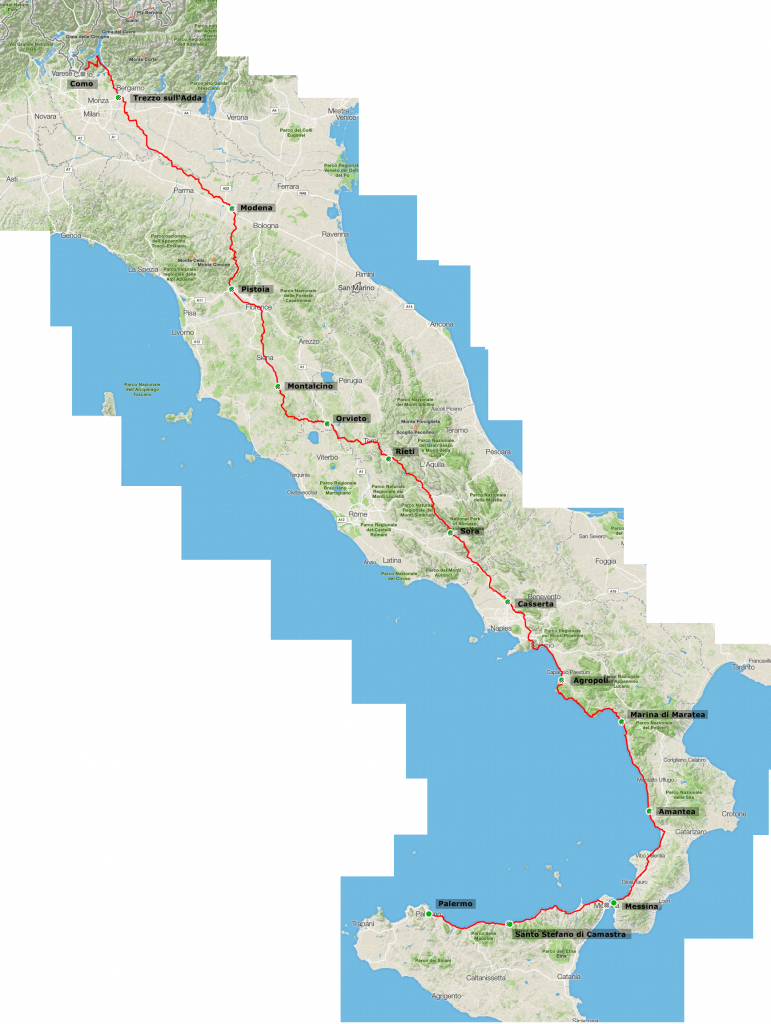 The Route – Palermo to Como

With the daily average of 85 miles and 5000ft of elevation, this wasn’t a leisurely meander through the culture and history of Italy, but riding that thin ribbon of road across the country was a truly unique experience. The country unfolded and changed at the pace of a bike as we moved through different geography, architecture, cuisine and language (who knew the Italians would have so many words for croissant?). With every coffee stop and every overnight stay you soak in just a bit more of that region, and rarely did Italy offer up anything less than beautiful. 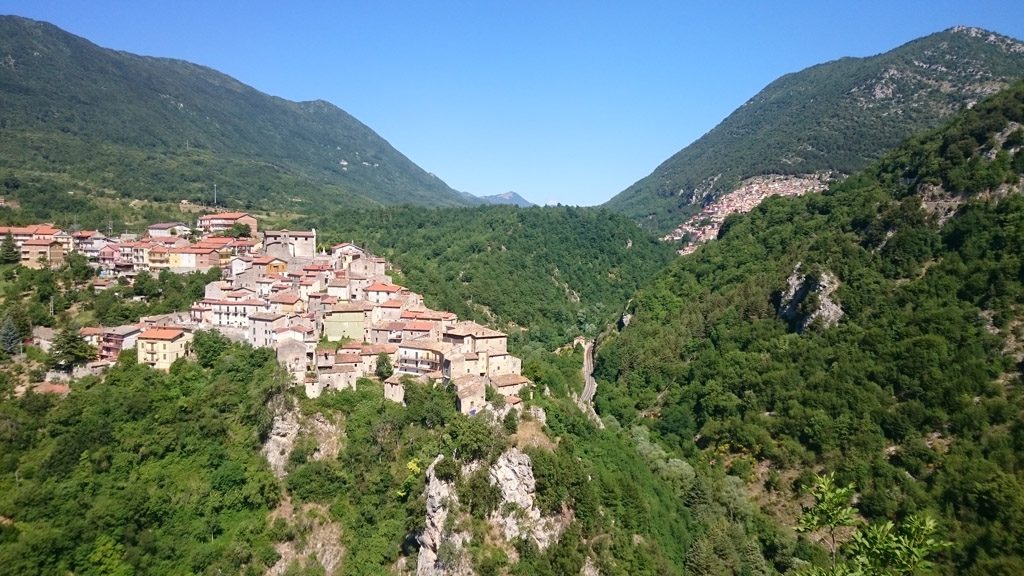 We would all have our highlights, but I might pick out the roadside deli/supermarket in Sicily where we stopped for fresh ham and cheese sandwiches, the views from Monte San Biagio after being “persuaded” by Darren to make the unnecessary climb, Jack and Simon’s guitar and harmonica at Jack’s home in Agropoli, the Amalfi coast (it’s a cliché for a reason), the Granita man amidst the chaos of Naples, the road from Sora to the unexpectedly lovely town of Rieti, the welcome site of Montelcino castle after a hard day’s climbing in Tuscany and riding into the air-conditioned hotel lobby after 135 miles of fierce heat in the Po valley. 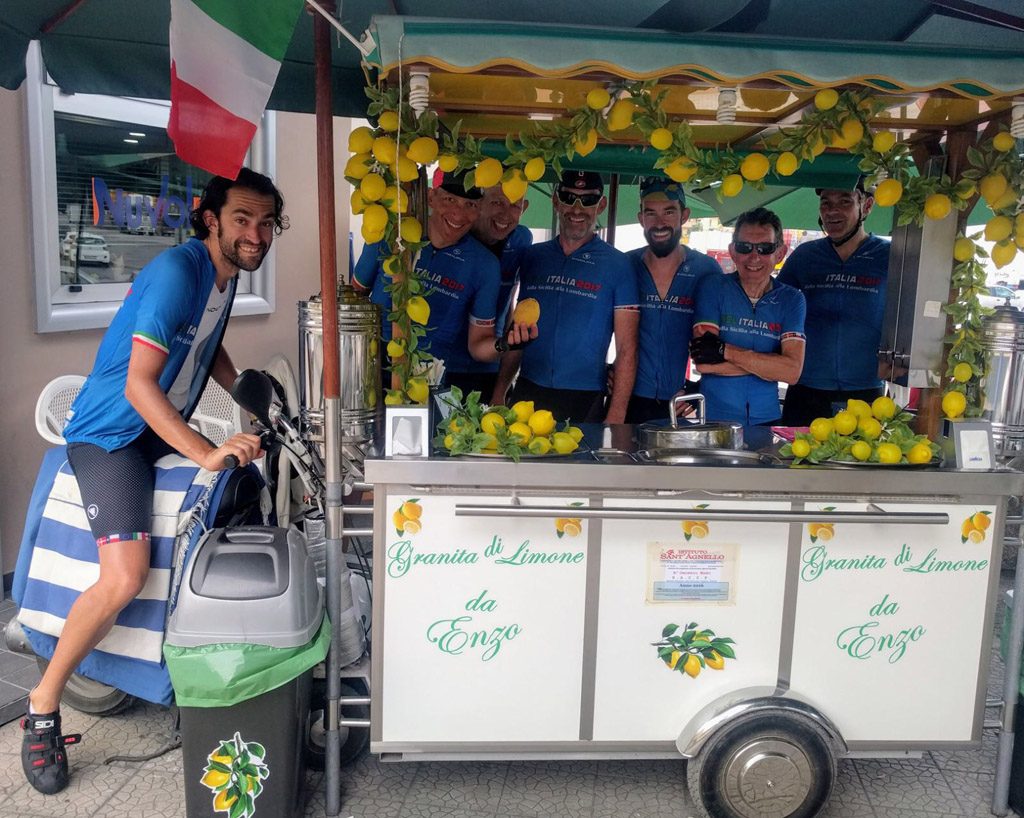 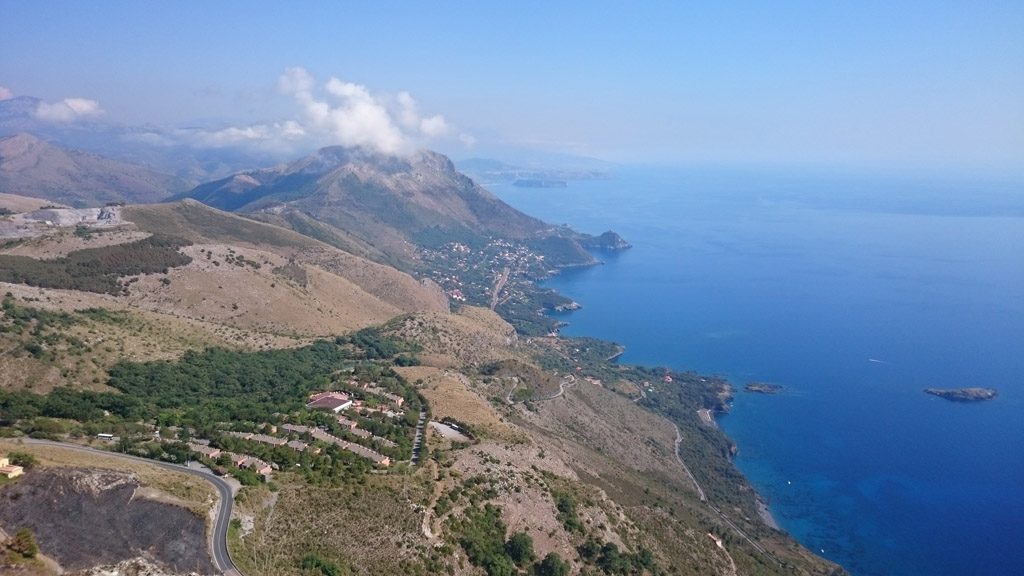 Teamwork
Sometimes we rode as a bunch, chatting, sharing the work, regrouping at the top of climbs and we worked well together. Justin chose his riders well given that, apart from 4 or 5 hours riding together every other Sunday, we didn’t actually know each other that well! Mind, I don’t think it was any co-incidence that half the riders were over 6 foot – useful men for Justin to hide behind in a headwind! 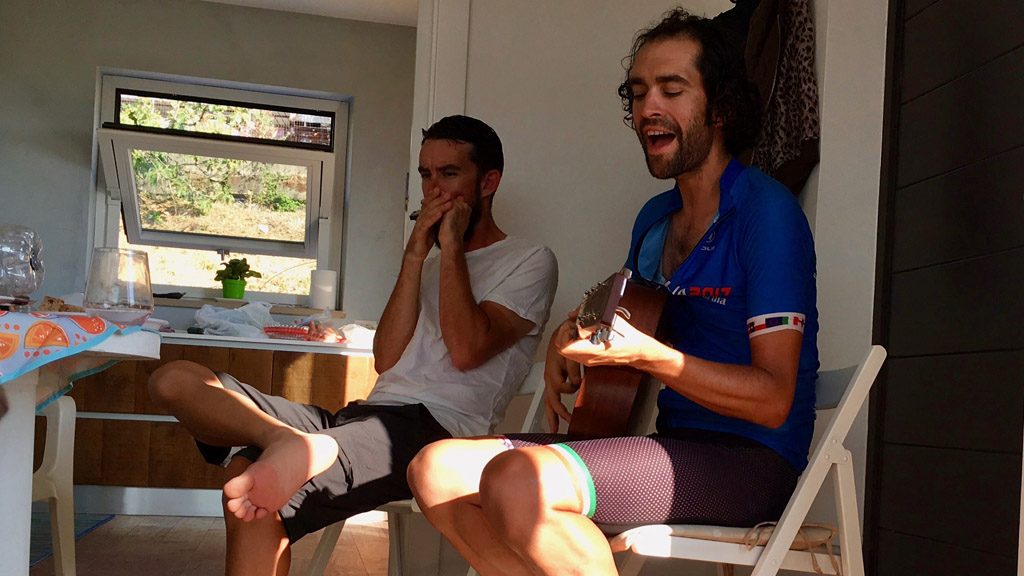 Simon and Jack work for the chain gang

Carrying too many winter McVities meant I’d often find myself at the back on the climbs, so to help everyone ride at their own pace, it made sense on some days that we split into smaller groups. I had a couple of days riding with Soren “early doors” Sjolin who preferred to get going before the heat of the day. Soren’s company is always entertaining and taking a bit more time to stop and stare meant we chanced on a cheap restaurant with stunning views of the Appennines. That leisurely lunch stop can be added to my long list of highlights. 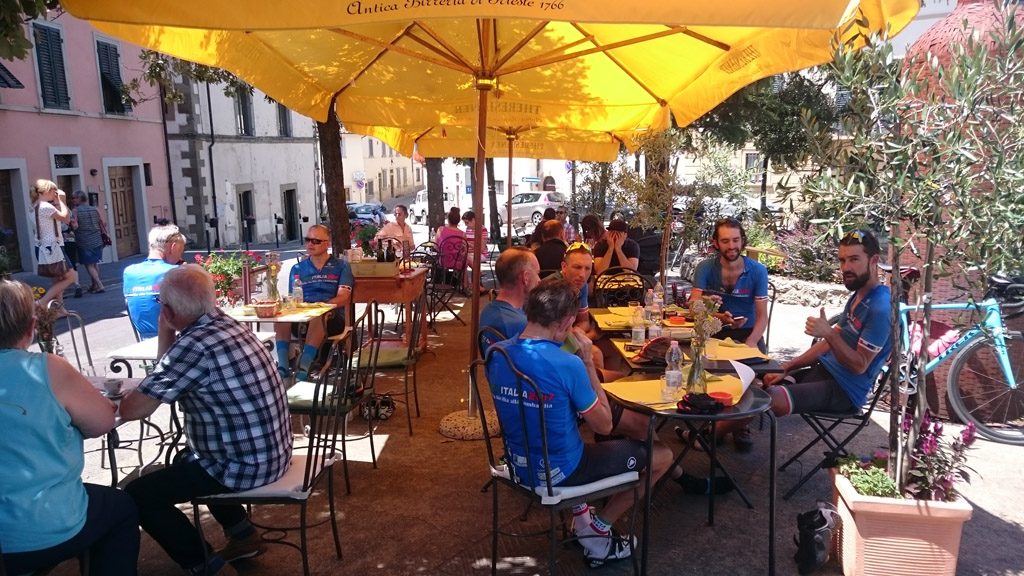 Lunch, high in the Tuscan hills

On other days a small gruppetto of Guy, Mark, Soren and myself would head out an hour before Justin’s fast group. The slightly slower pace made riding a bit more social, though it did allow Guy too much time to come up with ever more terrible puns. The quicker boys, I think, enjoyed the opportunity to ride unencumbered and over the course of the day as the groups leapfrogged each other at coffee stops, it always seemed to work out that we’d arrive at the hotel together.

Mercifully we suffered few mechanicals and only a handful of punctures. Sam provided the greatest excitement with an acrobatic spill on a twisty descent. You will have to ask him for the details as the full story is embargoed. Suffice to say that we were happy to have our two medics on hand who were able to provide the clear diagnosis that he was an extremely luck chap!

Como
Our last day was rather special. A valedictory lap along the shore of Lake Como, before tackling the climb out of Bellagio that lead to our nominated goal, the chapel of the Madonna del Ghisallo. The chapel became a memorial to cyclists after the Madonna was declared the patroness of cyclists by the Pope in 1949. We took one last group photo by the statue that symbolises the triumphs and suffering of cycling, and congratulated each other on finishing such a fabulous ride. There’s no doubt that Ciclitalia 2017 is right up there with the best of my cycling experiences; I’m pretty sure I’m not alone in that and I’d like to thank all the Ciclitalia team for the planning, hard work, good company and good humour that made it happen.

If you want to read and see more about the trip, visit the blog at https://ciclitalia.wordpress.com/ 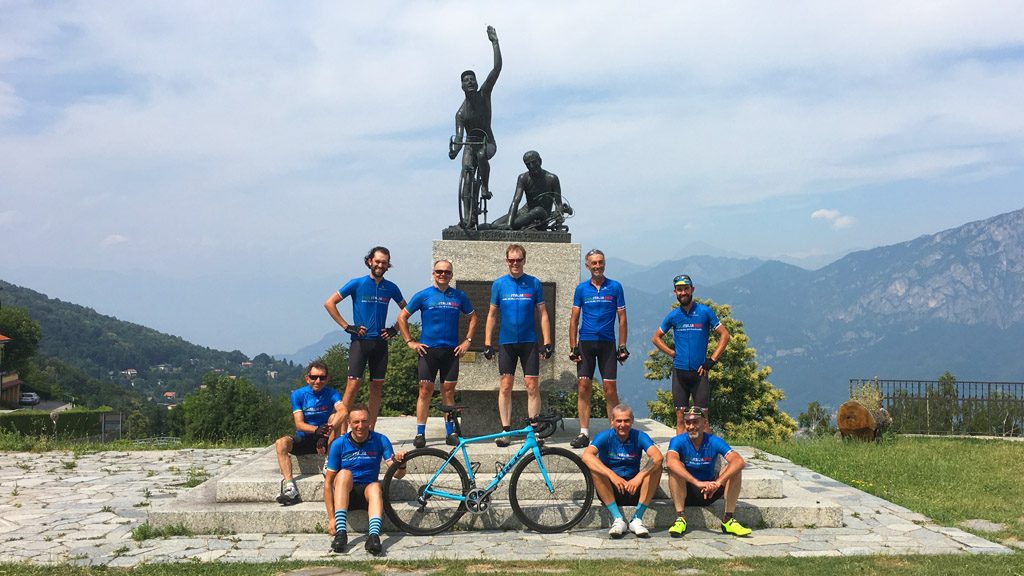 A Word About Justin
Justin was incredible on this trip. We all know he’s in very good shape, but he never looked in trouble. Better than that, he led the fast group across the whole 1200 miles, danced up 70,000 ft of hills and his smile never cracked in 14 days of riding. That level of fitness doesn’t come for free, especially into your 8th decade; it comes from a lot of consistent hard work over many years. So the next time you see him out on the road, tip your hat to him – Cappello Signore Wallace! 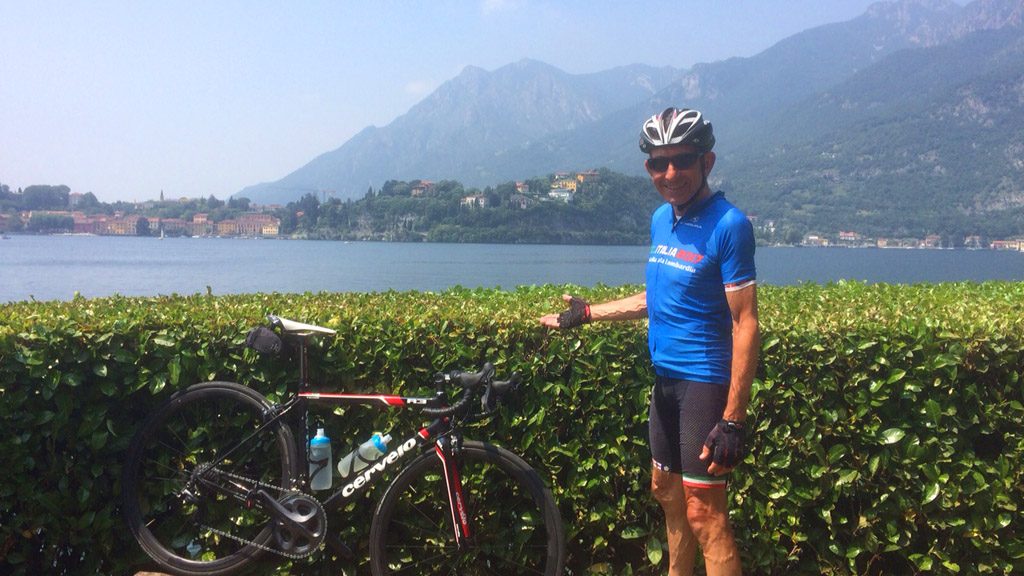