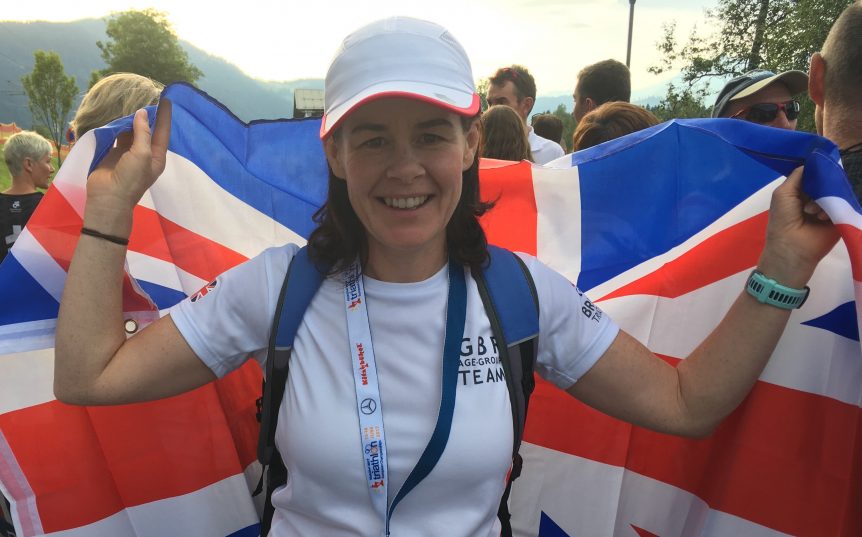 Inspired by WSW teammates, I had a go at qualifying for my first GB Age Group (AG) event back in in May 2016, at the Ellesmere Standard Distance Triathlon in Shropshire. Slightly strange, but for the European Champs, you qualify one year and race the event you qualify for in the following year. Still, it gave me a year to improve….!
This year the European Championships were held in the beautiful location of Kitzbühel in Austria. I arrived a few days before the race to get settled and it is just as well I did; with lots to do and everything really spread out across the town and the lake site.
I was pretty nervous. Actually I was very nervous! It is the biggest triathlon I have ever competed in, but the support I got from all my friends and family was incredible and I tried to hold on to the most consistent piece of advice which was to enjoy it! I also got to know lots of the other GB athletes, the biggest team at the Championships, and felt really supported by them as an AG first timer.
Lake Schwarzsee was the stunning venue for the swim, transition area and Expo. Much to my surprise, the lake was balmy, given the still snow-capped mountains in the distance. It was so nearly a non-wetsuit swim, with the water temp only one half of one degree below the cut off where wetsuits would have been banned. For someone that was panicking about the prospect of swimming in just a tri-suit a couple of weeks ago, there was a remarkable turn-around by the time I was in Austria and I was actually hoping it would be a non-wetsuit swim…. As, in theory, it is an advantage if you are one of the stronger swimmers.
My non-wetsuit swim recce the day before was amazing but I went with the optional wetsuit for the race, as wetsuits seem to produce slightly faster swim times, despite the pain to get them off!
I was really pleased with my swim; 22 minutes exactly and I was the 4th fastest out of the water in my AG and the fastest amongst my GB team mates. Swimming is one of my strengths and I rely on getting a bit of a head start at this point so it was just as well I had a good swim! I came out of the water feeling really strong and ran up the ramp enjoying the luxury of a blue mat all the way to the transition area. No muddy paths or gravel – I was getting to enjoy the privileges of the elite athletes who were also racing!
When I first heard that I’d be racing in Austria, I immediately thought the bike and run courses would be really hilly – it is a ski resort after all! However, after the 2014 event where the bike course resulted in a lot of accidents (due to a combination of gradient and bad weather), the bike route was re-designed. For 2017 it was a 3 lap course with one tough hill and technical descent in the middle, but a relatively flat course either side of that.
Sadly 2 competitors crashed on the bike course, despite the course re-design. One of my GB team mates had a really nasty accident and was air-lifted to hospital where she is now recovering.
Much discussion and procrastination on my part pre-event regarding what bike would be best for the course (Road or TT) was irrelevant! My road bike was brilliant on the hills – I was definitely stronger on the ascents than I was on the flat. Those on TT bikes struggled on the hills but had an advantage on the flat – so it was swings and roundabouts! I now know that a hilly course suits me better and all those hill reps up Primrose Hill over the Winter and Spring were worth it! I pretty much rode the whole course with a smile on my face – the endorphins had kicked in and I was just so glad to be there. After the bike I had lost a few places but I was thrilled to exit the second transition into the run with one of the favourites to win the Age Category, one of my GB team mates. However, I didn’t stand much of a chance against her in the run, as an ex-professional runner she literally flew out in front and I didn’t see her for dust! She went on to get second place in our AG.
The run is my weakest of the 3 disciplines and it started with a bit of a tough uphill stretch. But, the ascent that everyone had been talking about wasn’t as bad as I had feared. I think all those cross-country miles as a kid growing up in the Highlands of Scotland kicked in and despite having 6 weeks of being unable to run earlier this year due to injury, the two lap run seemed to pass quite quickly!
At times it was very busy on the course, with all the women and one male AG racing, though we had set off in waves. It was also quite hard to tell who you were racing against, as the coloured bib numbers (on the runners’ front) were the only indication of who was in your age group. But I just ran my own race and did the best I could.
The support all round the course was incredible. I also had my own personal cheerleaders, friends that had driven all the way over to Austria just to support me as my husband couldn’t be there.
I finished in 10th place, 6th GB athlete across the line, which I am really pleased with for my first GB Age Group event. Would I do it again? Yes – definitely.
Thanks to everyone in the WSW who has supported me, encouraged me and trained with me. Without you all it would not have been possible.
Annie 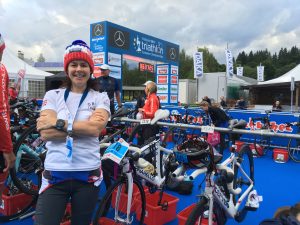 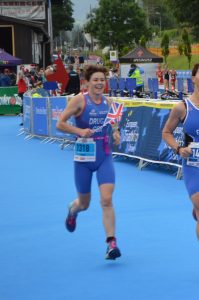 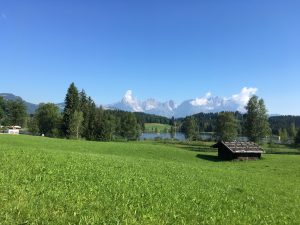