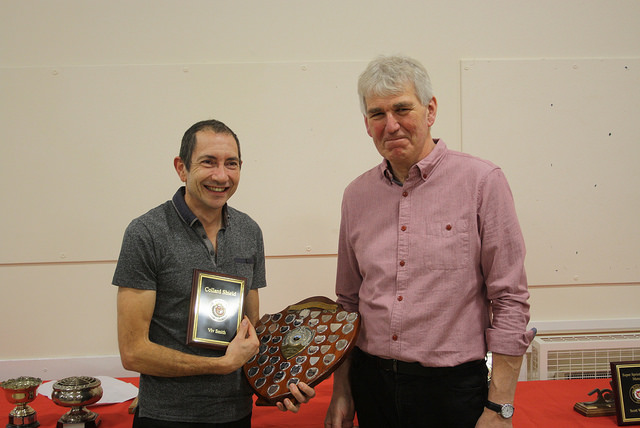 For the second year the club’s prize giving evening was combined with the Chenery Rose Bowl Roller Racing competition. While several of the prize winners were unable to attend, there was still a healthy turnout to applaud the club’s 2017 champions. The full list of winners are below.

With such a diverse club, there were trophies to be awarded across a wide range of disciplines and impressive performances to recognise from so many members. Laura Brown walked away with a box full of trophies having taken the Quantril Trophy (fastest 10 mile TT), the Millennium Trophy (Evening TT series Ladies winner) and the prestigious Hoxley Cup as Triathlete of the year amongst others. 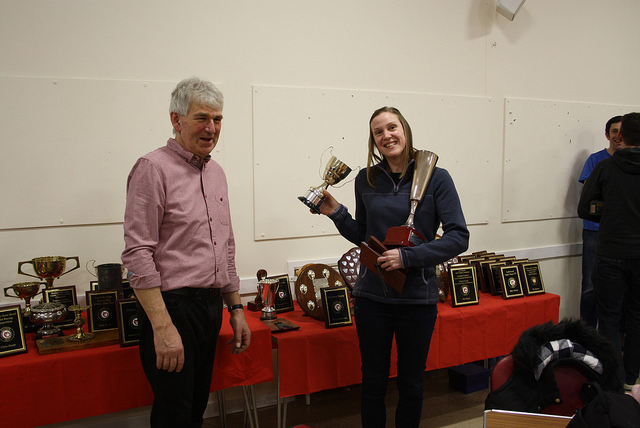 Laura Brown with some of her trophy collection

Paul Vickers collected several TT trophies, drawing oohs and aahs for his impressive average speeds, but it was Richard Farrow that took the clubs Evening TT Series Trophy. Viv Smith proved a popular winner of the Collard Shield conclusively demonstrating that age is no barrier to continuous improvement. There was many an envious glance as Paul Rooke proudly accepted the magnificent Fred Filby cup as winner of the (2016) Boxing Day TT. 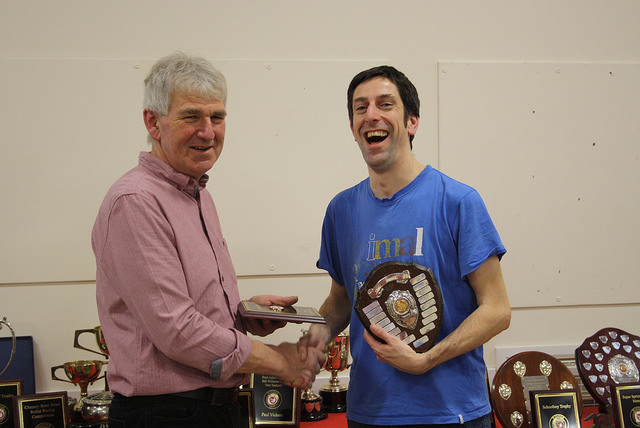 Richard Farrow Delighted with his wins

Paul Watson was a deserving winner of the Off Road Trophy, with Harley Gregory taking the under 17 equivalent, the Richard Pike Trophy. Harley also won the Fordham Trophy for the club’s best grass track performance. 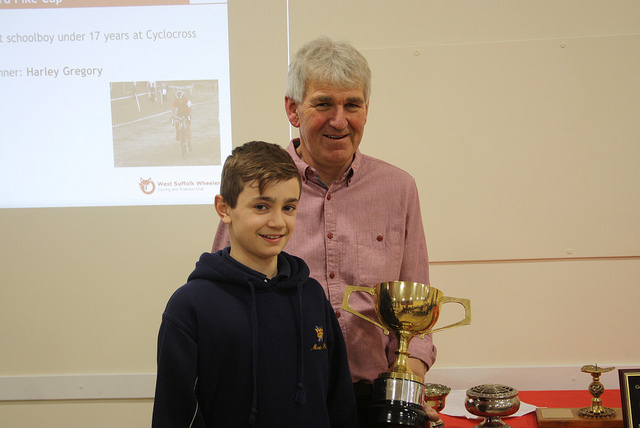 The winners from the club’s Triathlon Championships at Fritton Lake all lined up to receive their awards. This club championships has fast become a fixture in the calendar and enables the club triathletes to compete against each other across age groups and Sprint, Standard and Olympic distances.

The Golden Spike, awarded to the member who had the most misfortune while riding, was awarded to Sam Jackson for what was perhaps the most fortunate escape. Luckily we were able to reconstruct the drama to bring it to life for the Prize evening audience.

Sam Jackson… How did he do that!

The final award of the evening was the Edmund Mothersole Cup. All three nominees for the Cup gave outstanding efforts for the club and many found it difficult to select just one. Don Picking has given stalwart support in his years as President, Neil O’Brien has gone above and beyond in his continuing commitment to the future stars of the club’s triathlon section and Peter Heath has left an enduring legacy in the growth of the club during his long service as Membership Secretary. The results of the vote were announced on Saturday and the winner is… Peter! Congratulations and very well deserved. 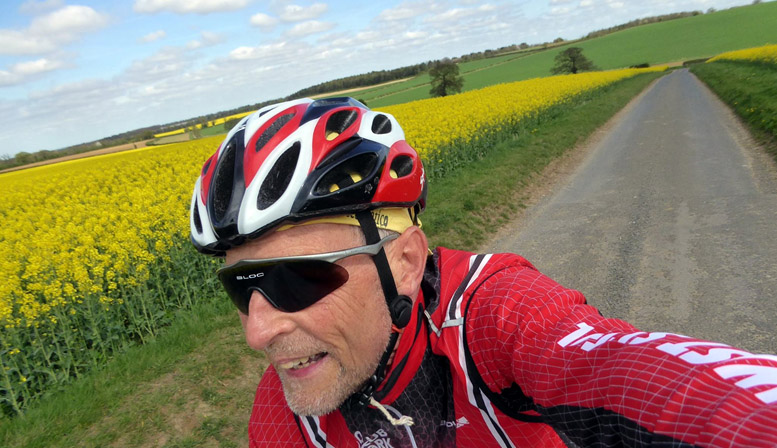 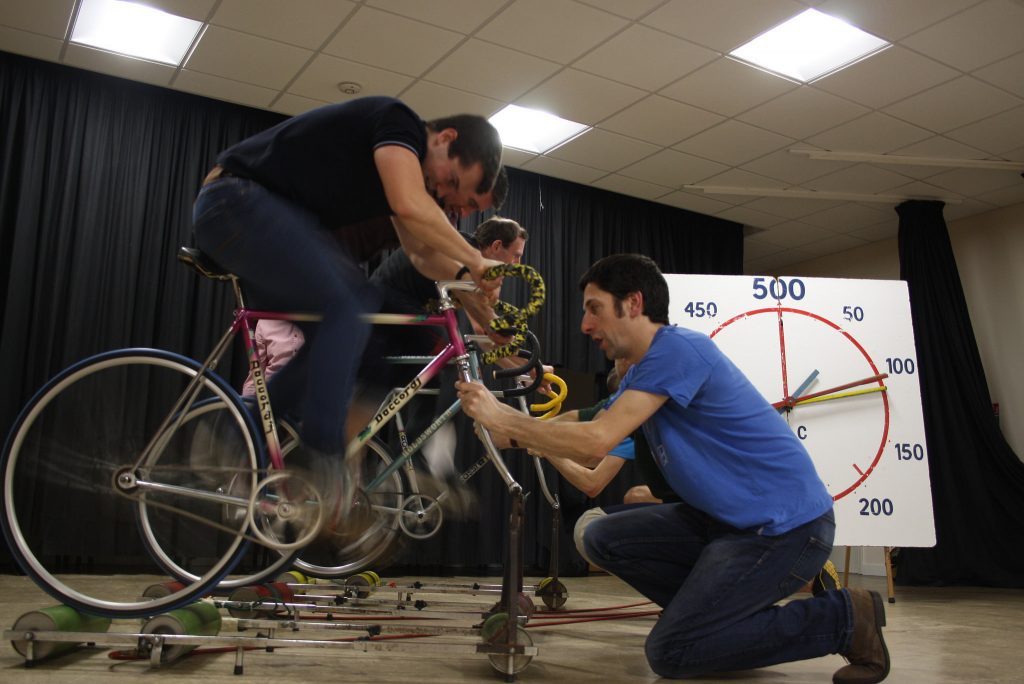 The club Roller Racing Championships were held alongside the Prize Giving. In the Senior Men’s competition, time trials determined the nine riders to compete in the three semi-finals. The semis were closely fought, but it was the club triathletes who dominated and filled all three slots in the final. New member Simon Wallace emerged as the clear winner with a smooth performance to beat a gritty showing from Malcolm MacFarlane in second and Matt Shingleton in third. 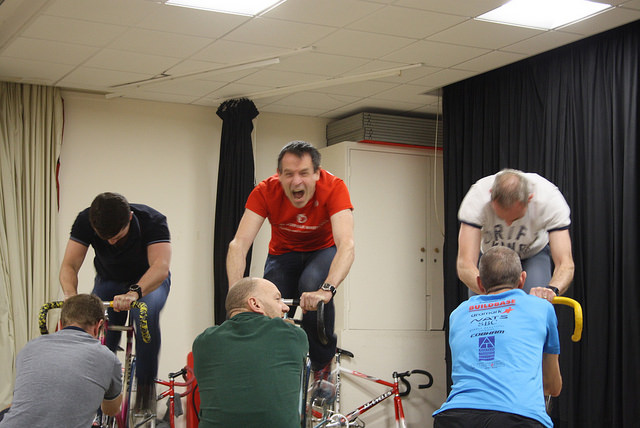 Malcolm gives it everything to win his semi-final

The Ladies competition was a straight run off between Laura Brown and Carol Watson with Laura pulling away in the last 150m to claim another win for the triathletes and another trophy to add to her impressive haul for 2017. Sadly there was only one entry for the Youth Roller Racing competition, so this has been postponed for another time.