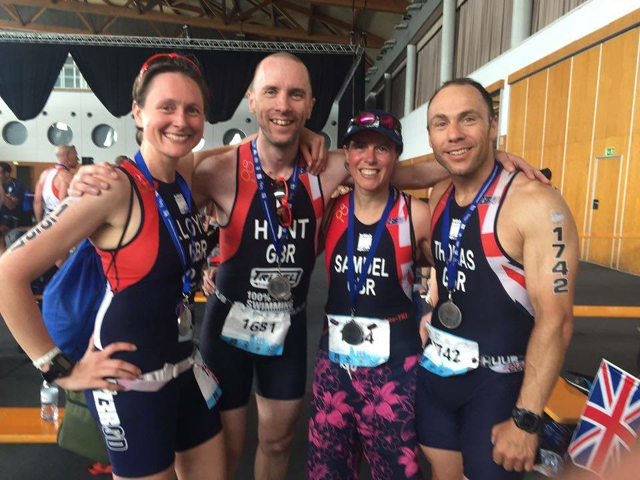 Wheeler Helen Samual represented Team GB at the ETU Triathlon European Championships in Lisbon on Friday 27th May 2016. Here is her report:[/cs_text]

“The event venue was the Parque das Nações, on the site built for expo 98 and very close to the airport, with the Age Group (AG) sprint race on the Friday of a weekend of events.

The first wave of competitors started at 11am with my 40-44 AG, along with the 35-39 and 45-49 female AG’s, off at 11.35. Before all that there were numerous activities that needed to be completed: registration, pick up bike, team GB briefing and team photo, swim and a bike recce which included hundreds of age groupers from all nationalities riding in a peloton down the motorway with a police escort, blue lights and sirens everywhere! Such fun! Racking of the bike, as is usual with these big events was the night before, so at 5pm the bike was left in transition and helmet and tri-suit checks done ready for race day. 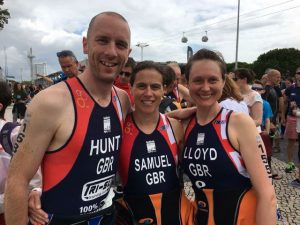 Forecast for race day was not looking great, however fortunately it was wrong and the rain held off except for a few drops on the run. The dry weather was a relief as the cobbles and cobbled speed bumps on the bike course would’ve been tricky in the wet! Pre-race routine meant being early down to transition to set up the rest of the gear, which is restricted to only what is needed for the race, no towels etc. We were given a box, with strict instructions that, like the elites, we would get a penalty if wetsuits etc were not put in the box during transition! Breakfast followed the final set up before heading down to the athletes lounge to suit up, drop a bag off and wait for our turn to head down to the swim start. 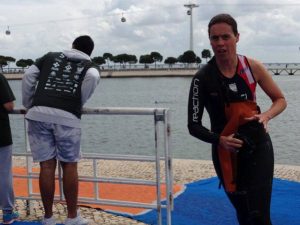 With 30 mins to go, we were moved in the start pens and prepared ourselves for the race. With the water temp at a practically tropical 19.5 degrees it wasn’t too much of a shock as we got into position between the yellow buoys, left hand side for me, then the horn went and we were off. The swim in general was fine, with the exception of leaky goggles, until the last couple of left hand buoys when it became absolute carnage and I got battered all the way into the very narrow and long concrete exit ramp.

Transition was fine; wetsuit safely in the box and out on the bike. The start over the cobbles was interesting, but once that part was done the first half out on the motorway was really quick. A glance over at the guys coming back the other told me they were struggling coming back into the wind. I managed to overtake a few people going up the incline to the turnaround point and then the strength of the wind hit home! With the bike twitching all over the place going back down the hill across the bridge and then what felt like a very long slog home, my legs were burning by the time T2 was reached. 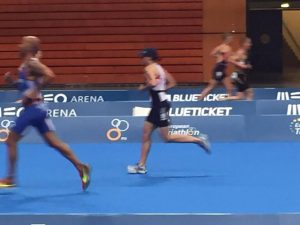 Shoes and helmet in the box and then out for the 2 laps of the run, passing through/into the stadium 3 times. The support out on the course was amazing and really kept me going, but by the end the lack of recent run training due to an Achilles injury told and I got pipped on the line by one of my teammates! I knew she was there, but could do nothing to hold her off… if only I’d had 10 more seconds in me I’d have made up 2 places! But at the end of the day, I gave it everything I had, am 18th in Europe and am overall happy with my performance….with an overall time of 1.21.07 Swim 13.37 T1 1.24 Bike 43.04 T2 0.59 Run 22.02 and had a great time with Team GB friends old and new…”