Many thanks to Malcolm for this comprehensive report on his and Ray’s Slateman race last Sunday.

“It has been too long since I last visited North Wales, but my love of the Snowdonia National Park is strong. The Slateman Triathlon has been on my bucket list for a while.
The drive along the beautiful coast road past the Great Orm and Menai Straits, at sunrise on Saturday morning was more than enough to peak our interest .
Traveling with my wife Donna in support, we met early with Ray and Julie Reeves, close to race control in the village of Llanberis.
On Saturday morning the weather was changeable. Riders in the sprint series were enjoying the luxury of an out and back up Llanberis pass, on closed roads.
We elected to pass the time with a walk parallel to the Snowdon Mountain railway. Views over Llyn Padarn and the wasteland of disused slate mines gave us a flavour of what was to follow.
Registration on Saturday afternoon at the Electric Mountain visitor center was efficient. News that the water temperature was in the 12.5 to 14C range dispelled the myth of icy mountain melt waters. Both Ray and I took advantage of a free bike tune up service. I certainly wanted to be able to access my lowest gears, as anxiety about my kit selection was starting to heighten.

​Considerable rain overnight was followed by clearer skys in the morning. I was lucky to rack my TT bike in a prominent spot on the end of a row. Race briefing followed. The swimmers were released in 12 separate waves at 5 minute intervals from 9am to 10am. I due off in wave ten and Ray only 5 minutes behind. I watched the elite wave make light work of the 1000m triangular course on the eastern end of Llyn Padarn. I saw one of the early competitors being pulled up by a triathlon official for attempting to exit T1 with his aero helmet on back to front. Clearly the water was still mind numbingly chilly.

​Five minute to acclimatise to the water temperature, in my opinion more than enough. It took me 300m to hit a steady racing rhythm. Water crystal clear and visibility great. The two large buoys marked the course and before long I was swimming to the lake exit. A generous crowd flanked the short run to transition. No dramas here with number belt and helmet on and both pointing in the right direction. Left onto the main road and into an 8km climb that starts off gradually and culminated in a seriously steep section as you approach the coll of Pen- y Pass. Briefly traffic and back markers, from early waves were the rate limiting step, but I was blowing hard by the time I started my fast and winding decent into Capel Curig. No time for a sneaky peak at Mount Snowdon on this occasion. Passing other riders added to the sensation of speed. Another left into the Ogwen Valley where the climbing was less sustained and the views of Tryfan and Ogwen Cottage were stunning. Narrower roads and additional traffic made the final leg of the bike ride quite technical. Lovely to see my support crew welcoming back me into Llanberis. T2 made for a switch into heavily treaded trail shoes. After a short and gentle climb along the side of Lynn Peris, the route turned North and immediately onto the steep access road of the Dinorwig Slate mine. This is such a major land mark and so influential to the history of the area. The switch backs were relentless and in places impossible for me and the majority of my cohort to ascend at anything beyond a brisk walk. Encouraging words from one of the event photographers greeted me at the top. The down hill was more enjoyable with some beautiful mountain trails descending through forested hill side country park. Damp slate and sharp rock continued to focus the mind. Close to the finish we passed the old Miner’s Hospital Museum. With sound from the public address system echoing across the valley I continued to push for the finish. Only once over the line did my grimace become a smile of delight and relief. More delight when Ray Reeves joined me at the finish and we realized we had done the course without injury.
I was very satisfied with my result, having given it all I’d got.
My run continues to let me down.
I don’t mind admitting I was one of those inspired by 2012 and whilst I have come a long way, much still remains to be done.
As for kit choice it all worked out well, but by the time I picked up my bike from transition the back tyre was soft and by the time I was back home in Bury St Edmund’s both tyres were flat. Lucky to finish?
Final time 03:14:01 placing me 205th out of 930 finishers. With Ray only a short distance behind 03:27:01
I can’t imagine a finer place to compete and can highly recommend this event to others that are up for the challenge.” 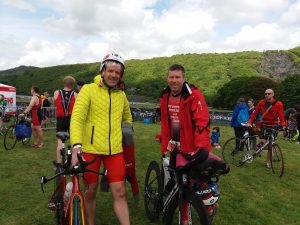 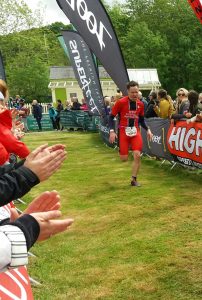 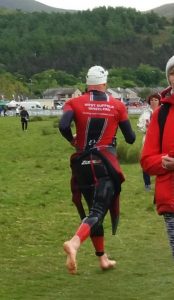